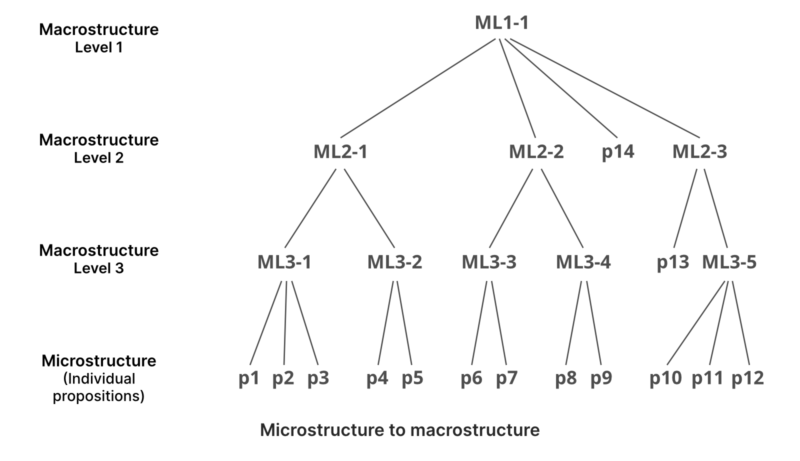 This is an extract from a longer paper I’m working on looking at how non-fiction books can be better structured so that readers can learn more from them. Please follow me on Twitter or subscribe to my newsletter if you’d like to be told when it’s published.

The central idea of the macrostructures concept is that a book, or any other form of communication, is composed of many different elements organised across multiple levels of detail and importance. This has important implications for authors.

The construction of new meaning helps to add depth to the message of a book. The other four functions all help readers to understand, engage with and remember non-fiction books more effectively.

The goal of macrostructures is transform complicated information into a format that readers find easier to understand and hold on to. Therefore it’s important that non-fiction authors spend time on creating macrostructures that are helpful to readers.

There are four strategies that authors can follow to create better macrostructures:

An introduction to the concept of macrostructures

The central idea is that a book, or any other form of communication, is composed of many different elements organised across multiple levels of detail and importance — or, to put it another way, over multiple levels of abstraction.

The term ‘macrostructure’ was first used in relation to the structure of texts by the German linguist Manfred Bierwisch in 1965.1 The concept of macrostructures was then developed in the 1970s and 1980s, by Teun A. van Dijk, a professor of linguistics, and also jointly by him with Walter Kintsch, a professor of psychology.2

Since then, however, the concept seems to have been somewhat neglected. That’s a pity as it’s very helpful in explaining how text is structured. It also has some practical applications for authors.

What do macrostructures do? 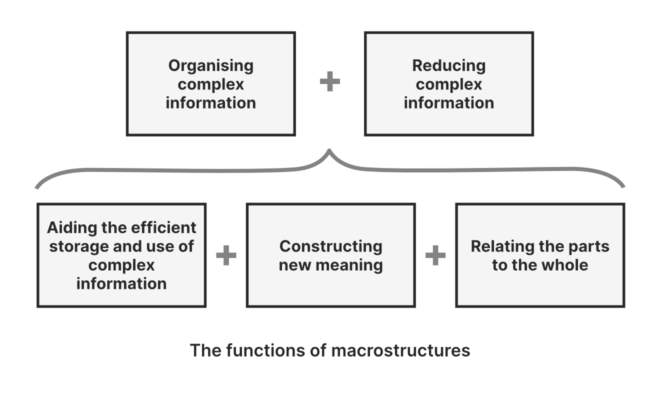 i. Organising complex information. The concept of macrostructures describes how multiple individual statements are organised coherently to deliver complex explanations and arguments.  The organising function of macrostructures enables ideas to be communicated in an understandable way.

“Not only do [macrostructures] serve as retrieval cues for microinformation but in many cases only global information is needed for subsequent tasks.”4

Macrostructures provide frameworks to which detail can be attached and which, as a result, help that detail to be remembered. However, sometimes a summary of the information is all that people require and there is no need for them to pursue the extra detail.

iv. Constructing new meaning. Another critical function of macrostructures is the ability they give to construct new meaning. Bringing statements together at a higher level enables new interpretations, conclusions and contextual insights to be generated. This, as van Dijk notes, allows “the construction of new meaning (ie. meaning that is not a property of the individual constitutive parts).”5

However, the macrostructure has another critical function, which is to show readers how the different parts of a text fit into the whole — or, to put it another way, give readers the big picture so they can see how all the detail fits together.

The construction of new meaning helps to add depth to the message of a book. The other four functions all help readers to understand, engage with and remember non-fiction books more effectively.

1. Van Dijk defines microstructures as “all those structures that are processed, or described, at the local or short-range level (viz., words, phrases, clauses, sentences, and connections between sentences)”.6 This definition can be quite hard to grasp. The key point is the emphasis on ‘local or short-range level’. Another way to put it is that microstructures are propositions which are appearing in the text for the first time and which aren’t the result of macrostructural transformation. Hopefully this explanation will become clearer as you find out more about macrostructures.

2. Van Dijk and Kintsch define a macrostructure as the more global content of a text, ie. the “topic, theme, gist, upshot, or point”.7 Given that texts have not just one overall topic, which subsumes everything underneath it, but also many other subsidiary topics, van Dijk and Kintsch view macrostructures as extending hierarchically over multiple levels. The number of levels involved will depend on the length and complexity of the text.

3. Paragraphs and lower-level macrostructures, such as chapter sub-sections and chapter sections, can be considered to have local coherence if individual ideas, concepts and explanations are relevant and fit together meaningfully. A book whose individual chapters are relevant to the overall topic or argument and which fit together meaningfully, can be considered to have global coherence. Obviously the goal of most authors is to produce texts that have both local and global coherence.

Macrostructures are developed by using macrostrategies (also called macrorules by van Dijk) to transform the microstructural content. Van Dijk suggests four macrostrategies. I believe there should be seven, as I explain in this footnote.9

i. Keep. The Keep strategy retains statements at a higher level without any change to the text used. For example, the definition of a central concept may be so important to the meaning of a book that it needs to be fully repeated at one or multiple higher levels of the macrostructure.

ii. Delete. The Delete strategy involves removing statements that are no longer required at higher levels of the macrostructure. One example of this could be an explanation of a concept. It has done its work on a lower level and is still, of course, available to be referred back to if needed. However, once it’s appeared, the author can assume an understanding of the concept and so doesn’t need to include it in any higher levels of structure.

iii. Condense. The Condense strategy compresses existing statements to highlight what is most important or relevant — and to leave out unnecessary detail. This process can also be described as paraphrasing or summarising.

iv. Generalise. The Generalise strategy involves constructing a general statement (such as a rule or a principle) from specific examples, cases or instances. This process is also known as chunking.

v. Organise. The Organise strategy takes existing statements and organises them into a higher-level knowledge structure, like a process, timeline or framework. This strategy can also involve describing how the different parts of a book relate to each other and the whole.

There can be a fine line between the Condense or Generalise strategies and the Create strategy. At times, the act of condensing or generalising statements leads one to a different way of looking at things, which can therefore be seen as the creation of new meaning.

vii. Amend. The Amend strategy is used when one starts with a higher-level statement, works it out in more detail and then realises that the initial statement needs to be amended to capture the nuance of the detail. It is related to the microstrategy of elaboration, which is described below.

2. The microstrategy of elaboration

The concept as described by van Dijk and Kintsch implies that movement only goes upwards as macrostructures are created out of microstructures. However that doesn’t adequately describe the process of writing. Writers will often start with a higher-level statement which needs to be elaborated on. This might occur either because they haven’t adequately worked out a concept in their own mind yet or because they realise that their prospective readers may be missing important knowledge and so need extra detail for a proper understanding.

Part of the art of writing consists of understanding the existing knowledge levels of prospective readers. This allows the writer to decide the extent of elaboration needed to communicate what readers need to know but not drown them in unnecessary or excessive detail.

Readers also do not move just from the microstructure to the macrostructure. They also move from summaries or the big picture down to the detail. So the concept of elaboration is useful for understanding how readers construct meaning.

Why the concept is important

The goal of macrostructures is transform complicated information into a format that readers find easier to understand and hold on to.

Therefore it’s important that non-fiction authors spend time on creating macrostructures that are helpful to readers.

It is also interesting to note that reading strategies such as skimming the introduction and conclusion of the book as well as the initial and final content of individual chapters can be seen as an attempt to identify the macrostructure of a book.

Van Dijk and Kintsch mainly write about macrostructures and microstructures in relation to individual pieces of content. However the concept can be applied more generally to domains and bodies of knowledge.

The world is such a complex place that we don’t begin to have enough time or cognitive energy to deal with all the detail that we encounter or that we would like to learn more about.

I’ve written more about this in my In defence of summaries article and my paper on Organising knowledge with multi-level content.