Last year was a year of unexpected political events like the election of Donald Trump and the decision of the UK electorate to leave the EU.

Momentous events demand explanation but often the reasons provided don’t get to grips with the complexity of what has happened.

This is partly due to a human preference for not having to deal with excessive complexity but also because columnists, bloggers and TV journalists often have limited space and time to get across their ideas.

What is a causal landscape?

Gary Klein, a US research psychologist well-known for his work in the field of decision-making, developed the concept of causal landscapes in order to get away from the common tendencies to provide excessively simple explanations for events and to assume that the eventual outcomes were always inevitable.

In his article on why Hilary Clinton lost the 2016 US Presidential Election, he writes that

“most of the accounts I have read zero in on a single cause for Clinton’s defeat, which is a tendency Robert Hoffman and I encountered in our research on what constitutes an acceptable causal explanation. People like to have everything boiled down to a single cause, which almost always is a great oversimplification.”

The first stage in developing a causal landscape is to identify a wide variety of causes and to group them into relevant categories. The second stage then involves working out which of the most important causes would have been easiest to change and could therefore have affected the outcome.

The 2016 US Presidential Election 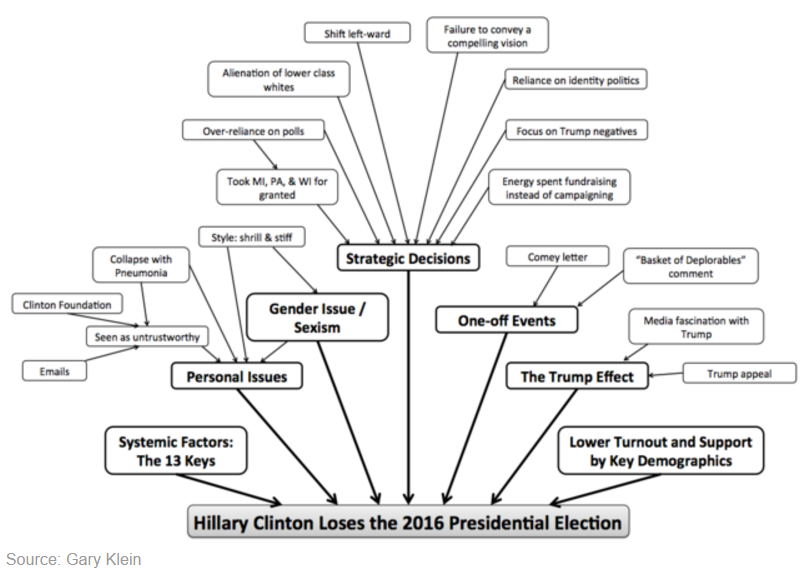 In his causal landscape, Klein has identified the key categories explaining why Clinton lost such as Personal Issues, the Gender Issue/Sexism, Strategic Decisions, One-off Events, the Trump Effect and Lower Turnout and Support by Key Demographics. Most of the categories also encompass a collection of sub-explanations. For example, the One-Off Events category comprises the James Comey letter and Clinton’s ‘Basket of Deplorables’ comment.

He suggests that there were four causes that might have swung the election for Hilary if they had been reversed or not happened: three of the campaign’s strategic decisions (taking Michigan, Pennsylvania and Wisconsin for granted, having attitudes that alienated lower-class whites and an emphasis on Trump’s negatives rather than developing a positive vision) and the ‘Basket of Deplorables’ comment. 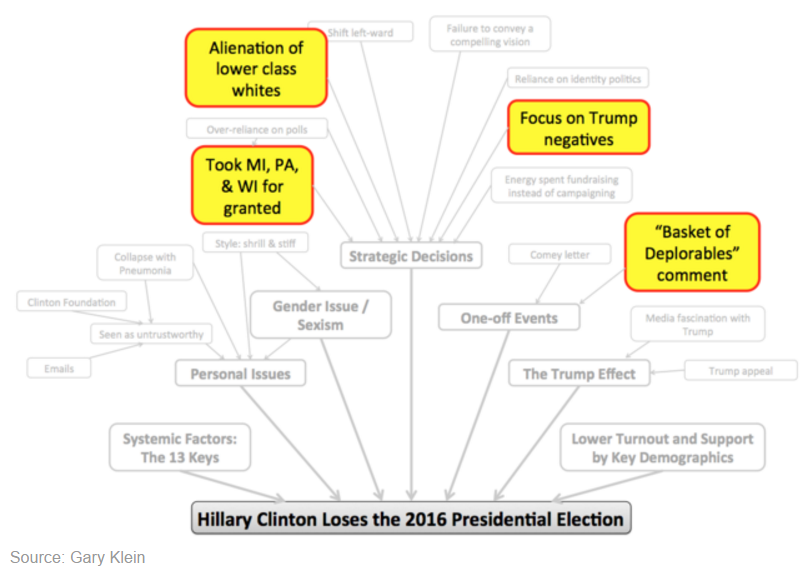 Introducing complexity and then making it simple

Gary Klein is of course entirely right that many explanations of events are overly simplistic. Not only does this impede an understanding of the complexity of reality but it also prevents the development of effective strategies in response.

What I find interesting about causal landscapes is that Klein introduces more complexity by insisting on the inclusion of multiple causes but then, by summarising these causes in a diagram, makes the explanation easier to grasp.

The beauty of diagrams is that one can compress a number of concepts into a small space and then show the relationships between them through their spatial positioning.

Causal landscapes are an excellent way of explaining complex events. By providing a visual description of the multi-dimensional causes of events, causal landscapes can help to deepen understanding without unnecessary simplification.

A causal landscape of Brexit

I have developed a causal landscape to explain the causes of the UK’s decision in 2016 to leave the European Union. See here – www.francismiller.com/brexit-causal-landscape.